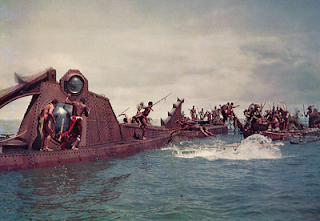 once, when i lived in the jungle with that heroin crazed monkey junkie we were traveling along up river, junky rolling spliffs and me reading my book, the sun was beating down high above, its rays searing on our naked backs, my eyes protected by a wide brimmed hat while junky wore his trendy ray bans. our guide a local pygmy was telling me to keep low, we were travelling through hostile lands where cannibalism was the norm, apparently the son of a wealthy american industrialist had been taken here many years ago.
in my arrogance i was telling our responsible guide that i was impervious to any form of cannibalism due to my alkaline diet and high ingestion of seaweed. my girlfriend at the time however was a carnivore and took precautions, hiding below in the cabin. gradually around dusk i could feel the presence of eyes. when you fall under the gaze of eyes its a feeling that is indescribable, especially in an environment like the jungle where the eyes are blended in like camouflage, the sensory system is acute but the logic and mind is trapped by the paradox, it's just paranoia the brain screams. Fortunately i had always trusted my instincts and i reached for my pistol, an old colt browning. i kept my face buried in my book, which by the way was not Conrad but PKDs 'do androids dream of electric sheep', anyways one eye on the page, admiring PKD's nonchalant attitude to drug use in the future, one scanning the bushland either side. I discretely attempted to get Junky to fetch the other guns but he was in some sort of weird semi comatose smack induced state with his cigar hanging out of his mouth and ray bans just dangling on the end of his nose.
i told my girl friend to go get the guns and ammo instead, which she did, then i told her to stay below as she was a carnivore therefore her flesh would be supreme meat for the natives, my logic based upon my romantic and youthful idealism, somewhat naive in retrospect. I knew they would attack at night and i also knew we could not risk landing ashore, therefore i steered somewhere between the banks in the centre of the river. Suddenly a dart appeared on the helm, and almost as silently and stealth like another. I worked out by its angle of impact where it had come from and fired a warning shot. the sound was echoed across the river and suddenly there was a massive cacophony as various animals and things must have reacted to this strange intrusive noise. under cover of darkness i lay low, one arm steering the other looking for signs of life. My girlfriend seemed to be praying, a side of her i had no idea even existed, our guide had taken the strange option of making a swim for it attempt despite the phirannas while junky seemed to be out of it despite the noise, with a weird transcendental grin upon his ugly face. when the jungle returned to its bug sound another noise seemed to rise from the depths, it was a spear. It landed right next to me. I stood up and pulled it from the side of the boat. Holding it over my head i snapped it in half in defiance. Junky seemed to stir.
How could these jungle people see anything was a mystery but their eyesight was pretty good despite the cover of night. Then i realised we should turn the lights off.
The next thing i saw was a needle or spike enter my chest and as i pulled it from my breast i fell and the jungle disappeared to blackness.
When i awoke from a dreamless dark place i found myself tied to a pole hanging upside down, i could see the jungle floor barely and if i attempted to move my head i could see tiny feet and painted dark skin. i attempted to talk, to shout but nothing could exit me. hours seemed to pass in this awful uncomfortable state. i was wondering where my gun was, then i thought about my companions, the cute little religious girlfriend, we had only met a few months ago, things were looking so promising.
Eventually we stopped. My body was disoriented i could feel many hands, tiny hands touching my head, my chest and legs, i could see these small eyes, hear this strange chatter chatter and squeaks and clicks and vague hand gestures. i think i caught a glimpse of white skin, i heard her cry out then silence.
Now everything was still. I looked around and saw we were in some sort of enclosure. My girlfriend had been stripped naked, she was painted in black and red designs. She was sobbing.
'Where's junky?'
What i was actually thinking was where is that fucking primate i want to shoot him before i die.
The girl just shook her head and screamed further.
I was resigned to struggle with the binding that held my arms to the post.
Hours later i managed to feel the knots and ties loosen, not enough but it was getting there. As i concentrated i and wriggled my hands i could see my girlfriend being led into a large hut but the women of the tribe, they carried her carefully and stroked her in that feminine way, at least she stopped screaming for a while, she was giving me such a headache i would have killed her myself.
Posted by captain mission at Friday, July 18, 2008