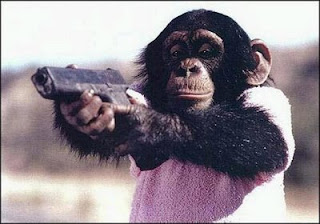 About an hour later they emerged from the tent, the women huddled together, giggled and bore platters of fruit and nuts and jungle food, while the men watched from a distance. One by one they came towards me and knelt down at my feet, they placed, rather delicately their offerings and beckoned approval.
'Where's the girl?' I asked, but they never once acknowledged my question, just smiled and pointed at their offerings. I looked towards the range of fruits, nuts and berries and fixed my stare upon the only recognisable shape there, a banana. The girls looked approvingly and quickly started chattering amongst themselves, i couldn't help but noticed the way they groomed one another. Then one of the younger ones stepped towards me and slowly peeled the skin from the fruit and broke of a small piece. She held her tiny hand out, towards my mouth. I was still bound upright to the pole but straining my neck forwards and down towards her tiny frame, i managed to clasp my teeth gratefully around the flesh. It was beautiful, not just a banana but there were tastes of flavours in there that i recognised, honey, cinnamon, maple syrup, molasses and cacao. I realised it had been a while since i had eaten and compounding my hunger was a deep thirst. However i did not want to give my enemies any advantage so i remained stoic and repeated my question,
'Where's the girl?'
Just then i heard a commotion from the tent they had taken her into, the sound of moaning, and then later a scream that became more of a sigh. I gritted my teeth and continued to struggle away from the binds.
The girls giggled and ran away and then directly in front of me the tent flap flew open and out stepped Junky in his trademark ray bans, he chewed on a fat cigar and gave me a casual wave, his pants were around his knees and it didn't take an anthropologist to know what he had been up to.
'Hey Junky what the hell are you playing at?'
'Just spreading the love Mission, she's quite a girl.'
'You filthy fucking primate,' I yelled.
'Ha, ha ha ha ha he he he he he eeeee.' Junky's laugh sounded manic and deranged.
'You disgusting baboon, i'll goddamn kill you with my bare hands.'
'Ah Mission. What you think i used force, was a brutal lover, you think i arranged this little drama just for you?'
'What the fuck are you talking about?'
And then she appeared, all dolled up in her native grass skirt and strange face paint makeup. She put her arm around the drug fucked chimp and kissed him on the cheek. 'Hey lover, are you going to put out the trash or shall I.'
I could see if this got out it would be humiliating, loosing my girlfriend to an organ grinders apprentice, if i had my gun i'd send him on a fast track to extinction.
'Fucking hell Junky, you are my business partner.'
'If you wanted loyalty you should get a dog.'
He jabbered away for a while, gloating and boasting about his plans, some nonsense about an acquisition manager and some property in San Paulo, Brazil. Then he came up close to me, for a moment i was worried he may walk around the pole and inspect my ties but he didn't, he just continued his smack induced banter.
The girl looked bored now, she nodded her head as if to concur with Junky but i could see through her. It was only a matte of time before she herself would double cross the chimp, i could read it in her expression.
'Junky, you can't trust her, she's going to drop you first chance she gets.'
'Fuck you Mission, you piece of shit.' she protested.
'Yeah she loves me Mission. Your just fucking with my mind.'
'Nope. Man you don't know women. She's going to jump ship first chance she gets. You don't think a doll like that is gonna stick with a gorilla like you.'
That's when he pulled out the glock.
Posted by captain mission at Saturday, July 19, 2008