my review of 'the lebs' is this.
a man with 3 degrees wrote this book.
he's inspired by the fact his hero, an australian boxer trains while soiling himself.
he's inspired by gang rape and anti semitism, and hatred towards white civilisation and australian girls.
there are moments where his words are great, and i confess the seed of a writer is apparent but 99% of this book is really fucking unreadable tripe and shame to the usual suspects, the publishers and university types who fuel this type of ideology. they should be sent to saudi arabia of venezuela to experience the utopia they aspire to.
no doubt this moron will be offered a sydney peace prize by the idiots who seem in control of cultural group think.
god help us all.

Posted by captain mission at Wednesday, March 28, 2018 No comments:

recently i re read some peter f hamilton, 'great north road' followed by, 'pandoras star' and 'judas unchained.
the gnr is a stand alone novel but the other two are part of a series called the commenwealth saga. the commonwealth being a universe we inhabit in the far future along with a few other alien races.
within this universe wormhole travel is the method of movement from space to space and faster than light ships are not necessary.
the main story is about a group of terrorist called the guardians whom are being chased by the authorities as they believe there is an hostile alien that has infiltrated the commonwealth and forcing it to war with a yet undiscovered alien race called the immotiles whom have been trapped in a dyson sphere by a mysterious force field which is released by an investigative team.
theres so much to like about the story, it's complex and intricate, the characters are all believable as is the technology and the various threads that all come together at the end.
i'm going to have a short break from hamilton and read 'the lebs' then i will return to his void trilogy.

Posted by captain mission at Tuesday, March 27, 2018 No comments:

i always hated the sydney writers festival  it should be called 'the left wing group think approach to what writing should be in a revolutionary framework for dummies.'
i went along to the university to catch three lectures and discussions which confirmed my absolute distaste for writers and publishers who manipulate the market through their self important lenses of distorted perceptions.
let's clarify.
first up are three young women publishers who all share a great interest in getting writers to get published, they go on about the submission process and the fucking way a writer and publisher has a special relationship. now this may occur in small publishing houses,  but let me tell you when i asked a permanent question that shocked the whole panel and made them withdraw into silence at the end of their talk. they were speechless.
i simply asked how much does the writer actually get from the sale of a book valued at AU$30 which is the average cost of a paperback here in the clever country.
the answer, reluctantly avoided by our experts was offered by an audience member at $2.50 to which i replied, 'then its similar to the music buisness, artists exploited for their talent but a bunch of marketers who sell.'
the panel just nodded and left.

next up was the young arab australian writer michael mohammed ahmad who was promoting his book, 'the lebs,' and while his energy and passion is great it's completely and dangerously misguided. he hates white culture, white people and white society. he's so filled with intellectual hate his three degrees and access to academic brainwashing are his fallback position when arguing his case.
i liked him, i liked his inner writer but basically his brain is controlled by ideologies that will never make humanity better, they always fail. he's just to far gone to see it. his hero is the australian boxer jeff fenich who trained so hard he shat his pants rather than leave his training program. he sees that as conviction whereas i see that as a glitch in his training. if jeff was so disciplined and in control he should have trained his bowels first not succumbed to soiling himself in a gym while training. it's not really what i consider a mark of respect, more of an indication of ignorance.  micheal puts back a lot into his 'black' community but it's antagonistic to white people, it's basically racist although mike can quote malcolm x as to why it is not. i would have preferred a writer who hates white people to say 'i'm racist, i hate white people' than someone to use an academic argument that is weak, out of space time, and irrelevant.
i bought a copy of his book, when he signed it the first question he asked me was, 'what's your background brother?'
i told him i was from earth.
but what i wanted to tell him was i am not your brother.

next up was a discussion with a group of internet news providers, which turned out to be nothing literary at all but a bunch of socialists having a platform to knock the usual suspects.
i tuned right out and at one point back in, only to hear one of the most respected internet journalists make an allegation about the australian newspaper in some articles it had been writing over the last two editions that was about debating societies at university. he suggested that the australian did not want women on them but he did not know i had read the pieces and he was misrepresenting, actually telling lies about the content. the australian was suggesting people are placed on panels as they have skills not because of their gender. it's a nuanced argument and there are vast and complex repercussions for women having a position based on being a woman rather than skill or talent.
it really was pointless arguing with a room filled with zombies, i just ate some nice food they offered me and left with my mind made up, i would never step foot in a university again as they are crammed full with dumb people.
Posted by captain mission at Friday, March 23, 2018 No comments:

i've never been a big birthday kinda guy but on march 10 i celebrated my birthday by returning to work after being sick for a week.
i was under the impression i was a year older than i actually am, thus i have gained a year, yes indeed. the best birthday present i could possibly have one would imagine.

Posted by captain mission at Sunday, March 11, 2018 No comments: 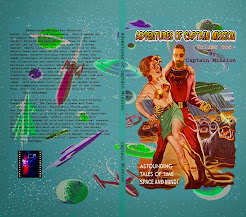