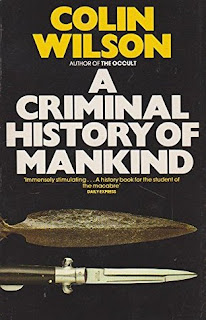 i finished 'vicious' and it's such a clever book, but the ending was, well weak and anti climatic. however i enjoyed most of it and 'sister ray' well, that songs forever changed for me.
i'm also reading colin's book 'a criminal history of mankind,' and this is a heavy trip. to cope with the sheer horror and the detailed analysis i only read one chapter and then start a different book and when i finish that return to the next chapter of 'criminal history.'
so the first bit colin suggests that the one factor that compels man to commit crime is 'it's a short cut.' which when you think about it is not only true, it's obvious. then he says submission and dominance in relationships often plays a psychological role. here he looks at killers whom work in pairs and how one is dominant and the other submissive, colin splits it further into various levels of submission. he also looks at the way masses of people can commit the most horrific crime (often murder) he looks at warfare and suggests perhaps since inhabiting cities man is tense and wired to survival, gradually being pushed towards primal urges.
depressing but here's the thing, animals don't murder.
Posted by captain mission at Sunday, November 20, 2022