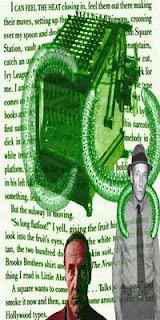 some people just wanna shoot words, some wanna eat them, some people fill them with hot air and helium, some leave them out in the sun, just burning while some people like to re arrange, chop em up and delete them, some like to read and others write, some make them black some make them white. words have power, words are strong, words go where they don't belong, words are crazy patterns in time, words are yours and words are mine. some like them frozen, some like them hot, some wrap them in fluff and some do not, one makes you wish that you had never been born, one makes you crawl back into the ocean. words are fabric, words caress, words define illusion, words define dreams, words squeeze in between the substance of all things.
words dance on the edge of the precipice, some kinda dangle and balance precarious. words defy forces like gravity, some just exist with no context at all, others need other words to make them feel secure, words are dreams and words are true, words never really do what you ask them to, words mislead words come close words make you suffer and they can bring hope, i like words that laugh and words that sing i like the words that love brings but i love words to misbehave, renegade words and words that save, i like words that heal and words that are truth, words that resound in the inner you.

i'm halfway through the new edition of the yage letters 'redux' a correspondence between william burroughs and alan ginsberg, plus a short story called 'i am dying meester.'
it's an updated (re edited) version of burroughs road trip looking for yage, otherwise referred to as ayahuscia.
our man in bogota first takes yage with an old but baby faced Brujo. he is a self loathing yet middle class american, junk sickness pulls his gravity hard and his observations though critical are quite probably accurate, the corruption and jungle fatigue, the lazy revolution that never comes, the bureaucracy that slows time itself, the natives are just lazy drunks, the jungle is unfriendly and filled with death. then there's his first experience of yage.
After loosing coordination, feet like blocks of wood, he describes vomiting violently, repeating, 'i want out of here' as larval beings in a blue haze passed by, each one giving a mocking squawk (later realized this squawking was the frogs croaking) Burroughs calmed down with the aid of a handful nembutal. that old smack riddled soul must have needed a deep healing, such was his horror.
interestingly enough he is traveling with richard schultes whose books i have also read and wade davis 'river of fire' documents his travels and wade travels in his mentors footsteps 50 years after. it was schultes that saved the americans from loosing the second world war by discovering a strain of rubber plant that could be grown in america. the US was so short on rubber a vital source for its wartime machinery that the whole process would have come to a grinding halt. schultes was given the highest authority to explore south america. as he did he lived with many tribes and sampled many hallucinogens including ayahuscia.
burroughs started writing because he liked the life of a writer, sipping gin in an exotic location, being fanned by natives while reading newspapers with expatriates. ha! the old romantic.
but it is alan ginsberg who really gets the aya experience, his last few letters and his essay encapsulate the death aspect totally. he gets it. where burroughs clung to his ego ginsberg let his go. he writes quite beautifully about it, he also writes accurately about the concept of 'god' i loved reading this part, not becuase it validates my own experience but because ginsbergs total terror is shared, his utter fear is relinquished and he is freed. it's quite magnificently written. although burroughs travelogue is imaginative and brilliant the idea of 'Yage' is not accurate due to his ego addiction.
Posted by captain mission at Wednesday, August 13, 2008