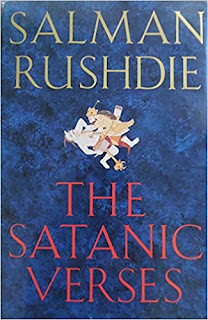 33 years after the fatwa, some lunatic gets rushdie in new york with a knife, all because he wrote a fiction book some religious nutcase didn't like. stone age mentality ruled back then and it's even worse now as we slide into quasi intellectual contextualisation of stone age ideas dressed up with new terminology,  the abuse of children, the forced medication of society, the polarisation between left and right, the isms, the weaponisation of the institutions, the dumbing down of education, the rise of mediocracy and blandness, the war against the individual. the rushdie was a landmark in my life, i left europe hoping to find a more libertarian society back then and for a few decades i did, australia was the promised land. but slowly it crept in, the rise of socialism, cultural marxism, the hypocrisy of the green economy, the big govt. surveillance, the war against their own people, it all infiltrated paradise. those moronic united nations, the corrupt who, the manipulative world economic forum, our masters want your money, they want your body and now your soul.
the rushdie affair was a huge turning point in my life as it should be for anyone who values the pursuit of freedom. all i can think about today is the end of the west. i've come full cycle.
Posted by captain mission at Sunday, August 14, 2022