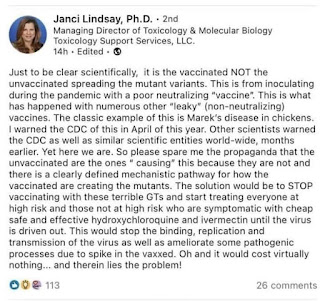 this is pretty much the information i have been reading about for over a year, actually ever since i stopped believing in the mainstream media and the lies it pushes on certain subjects. there are a number of subjects the media always lies about but this particular one has been dreadful.  it don't take a rocket scientist to join the dots, there are so many to join all pointing in one direction.

what i learnt was the vaccines only cause the virus to mutate. it has to because it's biological imperative is to infect and kill. it was designed to to do this. our bodies have a very good immunity system network that fights infections. however once you put a vaccine in it it compromises our natural immunity and targets the virus which then mutates and slips through the vaccine in it's new form and because our natural immune system is compromised we can't fight it.

no vaccine is administered in the middle of a pandemic.  it's given after when the virus is a singular not variant.

basic elementary research into evolutionary science indicates this yet the people that attack me say i don't follow science, it's true to a point. i certainly don't follow politicalised science which is basically what all the science is nowadays.

why the mainstream media pushes this narrative boils down to one man, george soros, a fucking evil bastard if ever there was one, just like fuaci, gates, schwab and the other fucking technocrats who basically have all the power and control. all it requires is to begin joining the dots. the left wing woke ideology is a threat to the way of life we have, debate all you wish about the illusion of freedom but given a choice i rather live in the illusion of freedom than the grim truth of a technocracy.