took a long walk with jake along the river, from hamstead heath where he lives to kings cross. it was quite amazing to see how vibrant and alive the city was, a beautiful spring / summer day, suddenly the englishness of everything stops being angular and begins to curve, taking on a softer pastoral glamour. the striking architecture along the river banks as you approach kings cross is magnificent, there are apartment buildings that are huge yet have a flow, a certain feng shui essential harmony clearly defined by the way sunlight plays such a considerable role.
the other striking element is the way casual conversation is from a multitude of global points, in the space of a few minutes i hear, french, spanish, american, scandinavian, chinese  and arabic, and it's really intermittently i hear an english accent. london has become a global city, not british but part of the planet, i like that. jake and i walk along into the hive of the cross, st. martins art school flourishes and opposite a line of barges functioning as businesses operate. everyone is smoking, everyone is drinking, i ask jake about this and he says there are no laws about drinking, no times, no restrictions. in fact in the space of our walk he buys two beers. we stop in a pub for a beautiful and very strong cocktail and halloumi chips with pomegranates, the price is about £30 which translates as AU$55.
we discuss political trends, environmentalism and the need for revolution. while i agree with him on most points i can see how his thinking is shaped by the dichotomy of right vs left, which i claim as an illusion. it stands that if right is wrong, left must be good but very few people can think through to the ultimate truth both are exactly the same in the current world. jake makes the mistake of thinking this is a capitalist society where i claim it is post capitalist, far removed from capitalism and closer to feudal technocracy, the left wing right wing is just an illusion of choice.
we speak about growing up in school, our respective countries, him australia me england. we share a few similar experiences both outsiders. we work out that we and my mum and dad did not stay in the countries we were born. it's an interesting fact.
the cocktails are kicking in, i'm feeling quite drunk, again.
it's been a beautiful day.
later we take my mum out for fish and chips. 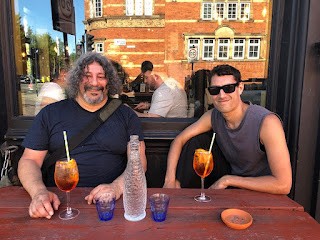