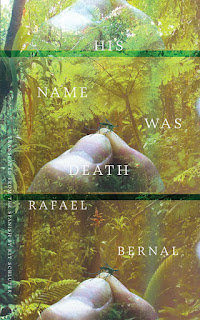 an unnamed washed up drunken misanthrope hides away from humanity in the mexican jungle with a small group of indians known as chiapas who see more than just a washed up failure who drinks, hunts and sleeps.
when he gets very sick the shaman 'black ant' saves him and while he's at it, also exorcises the alcoholic spirit and they dub the man 'wise owl.'
in his recovery wise owl listens to the mosquitoes, their buzzing and noise appears random and meaningless but as he listens he begins to hear patterns and formulates a theory of language which can be communicated by wise owl's home made flute.
thus begins a strange and brilliant tale, first written in 1947 a tale which is relevant now in terms of ecological devastation,  the idea of colonialism and what happens when one species assumes they are in control of the universe over another.
this is an outstanding book, rafael bernal is a mexican joseph conrad but with science fiction overtones, and a style that is compulsive. this book will blow your mind!
Posted by captain mission at Thursday, February 10, 2022